Historically, campaigns have relied on a combination of television, radio and direct mail as the primary means of influencing voters.  Each of these technologies has advantages and disadvantages

Television and Radio are historically one of the most effective tools to influence voters, however, both tools are generally expensive and poorly targeted.  Take for example the State of Texas (see map below).  A candidate running in the 2nd or  7th Congressional Districts in suburban Houston would have to purchase air time in the Houston media market where their ads would also be heard by voters  in other congressional districts, who obviously cannot vote in the 2nd or 7th.  In large media markets this can result in waste of up to 90% of the impressions your campaign purchases simply based on the mismatches of geography.  Keep in mind you don’t have to be in a media market the size of Houston to see this disparity, as the same issue exists in almost all markets.  If we continue with the example above and assume that the race is a primary, a campaign will likely lose another 80% of their audience because of partisan voter registration and low participation in primaries.  The net impact is that if you started with 1,000 people hearing your message only 20-100 were in your target universe.  Additionally, due to the shotgun approach of radio and TV, you have no ability to add variation to your message based on voter identification.

Direct Mail is a very effective method for delivering a campaign message, but is very expensive on a per household basis.   Additionally, due to the large quantities of direct mail households receive as Election Day nears, the overall efficacy of each subsequent mail piece can decline.  Also since large-scale direct mail campaigns take several days to produce and mail to voters, it may not be useful for responding to last minute issues. 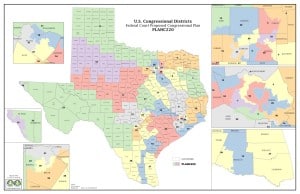 How does El Toro work?

Unlike other forms of Internet marketing, we only target the voter households that you have identified.  Because of this we can get very granular with the messages we deliver on your behalf.  Imagine being able to deliver various personalized messages to households based on the voter identification data that your campaign has obtained.  To get a more detailed description of how IP targeting works, we have published a full article on targeting voters.

Take the example we described above; internet ads are a fraction of the cost of a television or radio ads based on CPM.  Layer in El Toro’s technology, where we only deliver your ads to the voters you specify, which in turn can make your message 6-60 times more effective using the same budget.  Since direct mail is more targeted, the return on investment by comparison is typically smaller, but still substantial.

Due to the nature of our technology, we don’t work with more than one candidate in and individual election.  Simply put, working with too many candidates in a single region results in a situation where we are bidding against ourselves for the same ads - which increases our cost.  Our solution is to work with the first candidate that signs a commitment with us in a race.  Please note there are campaign minimums based on the type of race and payment is required in advance for political campaigns.  To learn more about the minimums and see if your race is still available please contact us.

Other common questions about El Toro.

Are we non-partisan?  Yes, El Toro works with all political parties. Why didn’t my campaign consultant or media buyer tell me about this?  El Toro’s technology is quite new, and while there have been precursors to our technology that use web browsing history (typically from cookies) to target ads, we are the first technology to hyper-accurately target voters based on home IP.

Should I use El Toro for everything? No, El Toro is a part of an integrated media plan.  Candidates still need to have an effective ground game and multi-modal media campaign.  El Toro simply replaces a portion of your traditional media spend and makes it more effective.  For smaller campaigns where traditional media is too expensive, El Toro will probably become your primary form of advertising.

There is a wealth of additional useful information available in the FAQ section of our website.[/vc_column_text][/vc_column][/vc_row]